Carrie B. Spinney, was born into a large musical family in the Black River region of Nova Scotia on July 13, 1879 surrounded by the sounds of traditional music. Born the youngest of nine children in a household where she said, “Someone was always singing”, and from an early age she began soaking it up. With a keen ear for melody and a strong retention she accumulated a wide repertoire of folksongs and ballads. 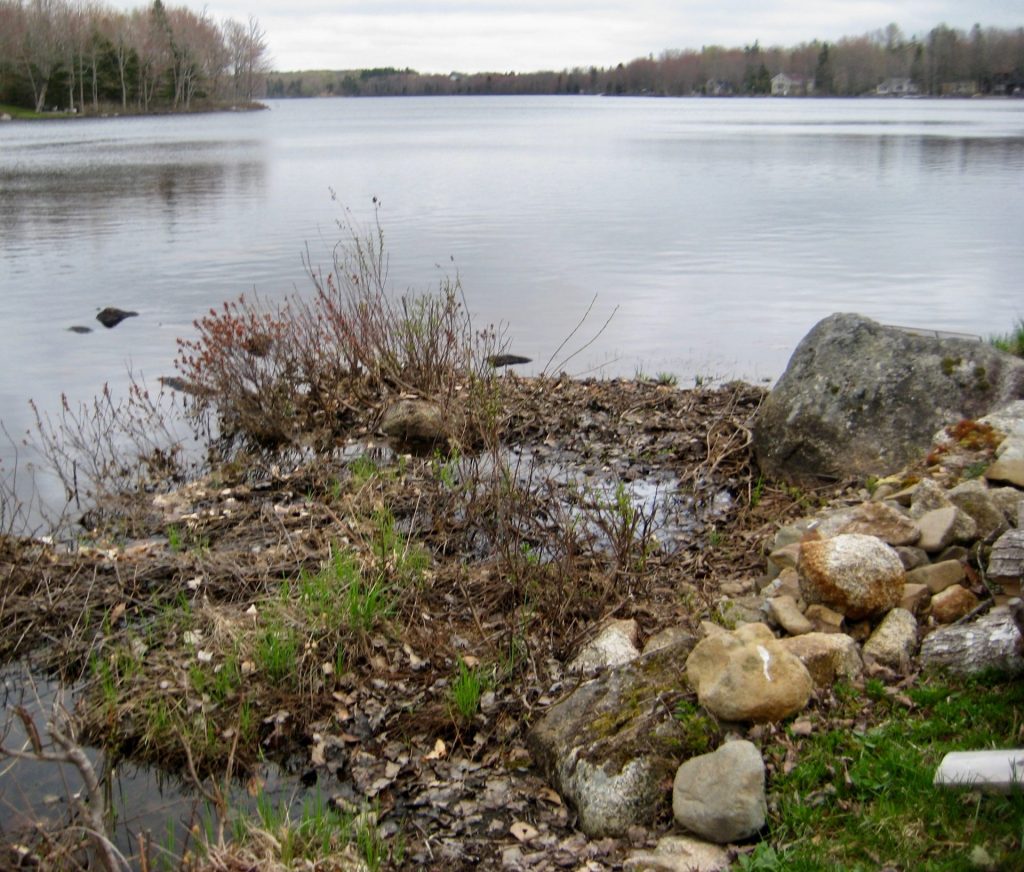 Sunken Lake, Nova Scotia. Carrie's home overlooked this lake, and this is the spot where she listened for her father singing as he walked home from his mill in the evening.

Carrie spent the first twelve years of her life in the two-story home her father, George Craft Spinney, had built on the shores of Sunken Lake. Born in 1837, he’d come from a long line of singers, and had spent many years aboard merchant vessels and brought home songs he learned from sailors. Her mother, Eliza Long (1840-1929) knew the songs from her Irish father and Scotch-English mother, and the songs her brothers learned in the lumber camps of the northeast. Carrie’s grandparents, aunts, uncles and cousins lived in homes around the lake, and gathered frequently with the Spinney family to share meals and music. The women sang at their evening quilting and seasonal paring bees. The men shared in the work of raising a barn or clearing the land of brush and trees, occasions that frequently concluded with song, fiddle and dance.

Theirs was a rural farming community located ten miles south of the bustling wharf at Port Williams, a fair distance by ox and cart. Her father and brothers made the journey quite frequently, but less so the women. Carrie was twelve years old before she traveled beyond their settlement to Port Williams. The isolation from the influences of a wider population served to insulate and preserve their style of singing as well as their unique versions of songs they knew.  The only genre of music Carrie reports ever hearing were the traditional songs carried to the province by the constant stream of immigrants from the British Isles and western Europe. It was the popular sound of the day, and present on everyone’s lips: on the merchant sailing vessels, in the lumber camps, at the pubs, and on every home hearth. 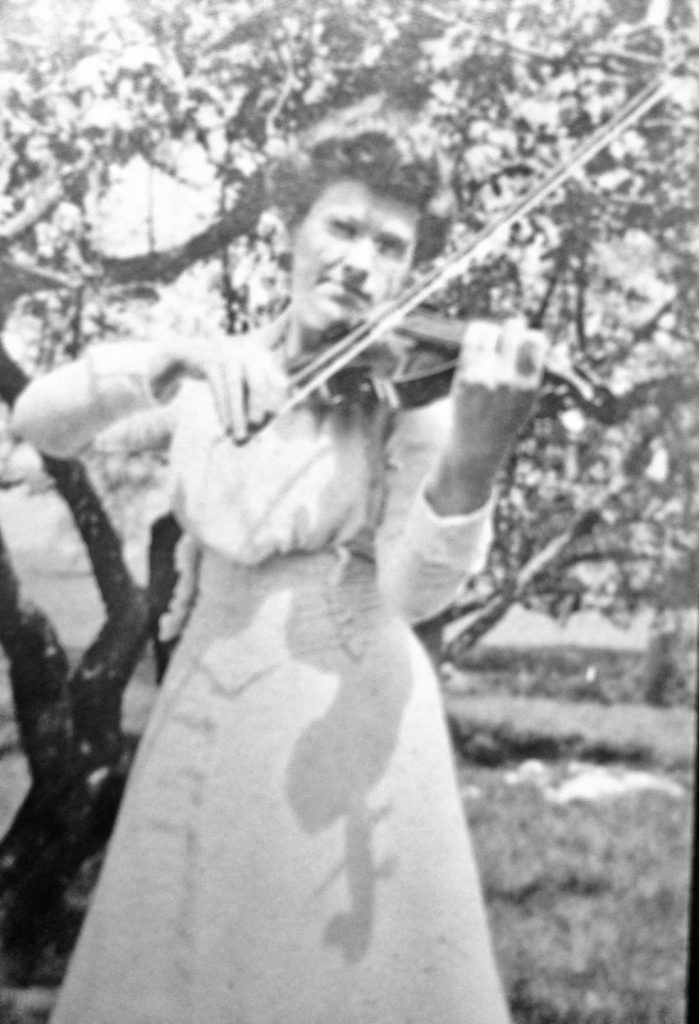 As she grew older, Grover looked back on her childhood and their way of life with great fondness. The families at Sunken Lake, as elsewhere in the province, were completely self-sustaining. Almost everything they ate they grew themselves in the loamy soil, or caught in the rivers and streams teeming with trout, or trapped and hunted in the forests that hemmed them in on all sides and was home to bear, deer, lynx, moose, rabbit and foxes. Their clothes they made from the wool sheared and spun from their sheep, then dyed the hues bled from tree bark and plants growing wild at their feet. Carrie remembers rabbit stew for supper, the smell of kippers and potatoes sizzling on cold winter mornings, and collecting berries by the bushel full in summer to store up for winter. Strips of apple and pumpkin hung to dry from the rafters.The interior of their home contained handmade chairs, hook rugs, paraffin lamps, and a table large enough for most of them to sit on the rare occasion when all nine children were home together.  In her parents’ household, the day ended in the soft fire light and the sound of her parents singing. Her mother’s knitting needles clicking steadily while she sang, and her father with his pipe, weary from a hard day's work on his farm and at his sawmill.

By the early 1890s the family fell upon hard financial times. Carrie’s older brother had purchased land in Newry, Maine, so her father went on ahead to help him build a house. In the late summer of 1892, the family left Sunken Lake and relocated to Newry. Carrie attended a one room school house in Newry for primary school, then went on to Gould Academy High School in Bethel where she met her husband, Almon Roy Grover. She was married in 1896 at the age of 17, and had three children: Gertrude, Ethel, and Roy.

Carrie continued to sing her songs throughout every season of her life. In the 1940s she sang at folk festivals in Washington, D.C. and Boston, and came to the attention of the prominent song collectors Eloise Hubbard Linscott, Sidney Robertson Cowell, and Alan Lomax. Her correspondences with Alan Lomax sparked the idea of publishing a book of her songs. She was insistent the songs be transcribed exactly as she sang them, so she returned to Gould Academy to solicit the help of music instructor, Ann Griggs, who transcribed all 140 songs. Gould Academy published Carrie Grover’s A Heritage of Songs in circa 1955 when Carrie was 75 years old. It was intended as a family keepsake to be passed on to her grandchildren and great grandchildren. Throughout the songbook, Carrie recounted the scenes of her childhood by Sunken Lake in the late 1800s in an effort to ensure the subsequent generations knew their family history and lineage through the music sung and played by their ancestors.

Unbeknownst until its discovery in 2016, Carrie had assembled a second songbook in 1957, eighteen months before her death, but illness kept her from completing it. She left her manuscript of handwritten scores with close friend and fellow fiddler, Fred Hill, then departed Gorham for her son’s house in New Jersey. The manuscript remained at the folk song society where Carrie had sung for many years.

By the time she’d finished transcribing songs and sitting before song collectors’ clunky recording equipment she’d left behind an impressive collection of 242 songs and nearly 50 fiddle tunes. Equally significant is the volume of writing she’d composed. There were dozens of letters to Alan Lomax and Helen Creighton during the years she was recording and performing, as well as to cousins in Nova Scotia whom she implored to help her with the words to forgotten verses.

Carrie’s daughter Ethel had typed her mother’s handwritten stories into a sixty-seven page booklet. In vivid detail Carrie recalled how they had made soap and straw hats, the games she'd played at school, her brother’s tragic drowning on Christmas Eve, the song her mother sang while trimming the beloved rose bush, the story of her great-grandfather fleeing a press gang, and the healing remedies her mother forced upon them in sickness, some of which were taught to them by the native Mi’kmaq. She describes her relatives, friends, and neighbors, and their quirks and characters. She gleefully tells of the childhood pranks they inflicted on one another and the joy and laughter, the loss and sorrow they shared and endured.

The accumulation of her words is our window to the world she knew in an era of song-singing that has slipped through the fingers of modern times. Her commitment to the preservation of her songs and stories captures the heartbeat of the lives and circumstances of generations of people. The Carrie Grover Project is the 21st century attempt to ensure its preservation.

Carrie passed away in 1959 at the age of 79 at her son’s home in New Jersey. She is buried in Gorham, Maine beside her husband.